Roman’s Lab Chess: Mega Pack 2 of 2 of The Entire Collection of Chess Videos

Grandmaster Roman Dzindzichashvili is a former US and Russian Chess Champion, and coach of the former World Chess Champion and chess legend Garry Kasparov.

This chess DVD collection by GM Roman Dzindzichashvili represents an invaluable guide to learning chess openings, based upon deep understanding rather than shallow memorization.

Viewers are guaranteed to improve their chess ability with the diverse expertise and high-quality production of the Roman’s Lab Chess DVD Series.

**This is the lowest price available on the internet for the entire collection of 117 Roman’s Lab Chess videos.** 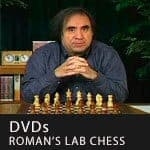 Roman Dzindzichashvili is a chess Grandmaster, former US, and Russian Chess Champion. He is also a well-known theoretician and a chess coach.

Among his students are 3-time US Chess Champion GM Gata Kamsky, and GM Eugene Perelshteyn.

Due to his encyclopedic chess knowledge, 30 years of coaching experience and numerous grandmaster pupils, GM Roman Dzindzichashvili charges about $100 for a single hour of chess coaching, which is undoubtedly worth it.

You get every single lesson Roman used to coach pupils like Gata Kamsky to 2700 Elo!

If you’re ready to learn from a top trainer (with a proven ability to create grandmasters), this chess DVD collection is just right for you.

The Roman’s Lab Collection consists of 117 individual courses with lessons like: 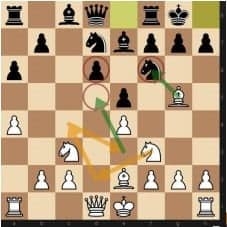 Get Roman’s checklist for finding hidden tactics. This checklist replaces lengthy calculation with a rules-based approach, helping you to dominate in tactical positions.

Roman explains all the typical pawn structures including the best plans for both sides and where each piece ‘belongs’. You’ll know exactly what to do just from the pawn structure – no need to memorize the opening theory!

How to Use Blitz:

Most club players are actually weakening their chess by playing blitz online. Dzindzi shares his personal practice for using online blitz to test openings, train your tactical eye and stay sharp between tournaments. Many fantastic training secrets waiting in this one!

These courses alone are enough to significantly boost your rating – and there are another 113 titles included in this collection!

Click Here for more information on each individual DVD that is part of the 117 Volume set of the Roman’s Lab Chess DVD Series.

per page
Variable quality Review by agent-n053 The quality of video is often not high and some lines have not stood the test of time. Still, at less than $1 per hour of instruction, students can probably gain something from it. (Posted on December 18, 2019)