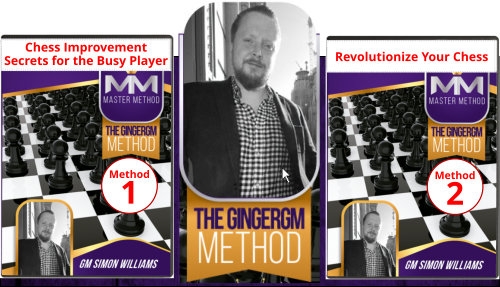 Want to realize your chess potential but don’t have much time to study chess strategies?

“Ginger GM” Simon Williams has you covered.  In this comprehensive 15 hour course, Simon reveals the training secrets and shortcuts that helped him become a GM with a fraction of the time and effort it takes most people.

You’ll learn how to get an opening repertoire that fits your style and become an expert in it, not by memorizing a ton of theory, but by absorbing the key patterns.

Learn when and how to launch an attack in the middlegame, from the GM who models his game on Mikhail Tal’s! And piece it together with a positional understanding that allows you to get those great positions in the first place.

Add rarely discussed tips on rapid, accurate calculation in the chess middlegame, player psychology, and killer endgame instinct and you’re ready to become one of the most feared competitors around – even if you only have 1 hour/week to study.

HOW DOES THE GINGERGM METHOD CREATE SUCH RAPID IMPROVEMENT?

Here are a few course topics to give you an idea:

The 16 hours of lectures alone will give you all you need to become a master with only 1 hour of study per week, but in addition to this - you also get the following bonuses:

WHAT ELSE IS INCLUDED?

Now GM Simon Williams, a master of attacking play, explains how to cure this problem.

Simon, aka “the Ginger GM”, builds on the ideas from his first Ginger GM Method and now focuses on the most important skill in chess: tactical ability.

In this new 15 hour course, Revolutionize your Chess, Simon reveals all his favorite attacking secrets for crushing your rivals in spectacular fashion!

Learn how to get fantastic positions with a complete attacking repertoire, focusing on the must-know strategies and tactical motifs. With your chess pieces in aggressive formation early in the game, you will be ready to destroy your opponents!

The second part of the course helps you seal the win. Learning from the games of such giants as Tal, Alekhine, Botvinnik, and Karpov, you will learn some advanced methods for finding the very strongest move.

GM Williams teaches you innovative chess strategies concepts such as “the awakening”, and will share his #1 secret for improving your visualization skills!

Jump to the next level with GM Simon Williams’ Revolutionize your Chess!

Part 1: How the openings connect to the middlegame

Part 2: How to find better moves

He obtained Grandmaster the Grandmaster title 2008, by accomplishing the final norm at the Hastings International Chess Congress 2005/2006 and the 2500+ rating at Hastings 2007/2008.

His highest rating so far is 2550, achieved in November 2009. In 2009, he organized the Big Slick International in Purley, London, which comprised an invitational GM tournament and FIDE Rated Open.

If you’d like to improve your overall chess skills then this collection is just right for you.

The Ginger GM, Simon Williams, will show you how to create winning plans with a solid chess strategy.

GM Simon Williams will walk you through some of the most common mistakes the club players make and will also tell you who to overcome those type of mistakes in a 3 part series of videos, also included in this package.

Learn how to get fantastic positions with a complete attacking repertoire, focusing on the must-know chess strategies and tactical motifs. With your chess pieces in aggressive formation early in the game, you will be ready to destroy your opponents!

per page
Happy enough Review by camretsim A bit too early too award more than 3 Stars at this stage. I have a feeling that I will get a fair bit out of the material which is huge, and thus at the price was probably a real bargain. I paid about $80 the lot. (Posted on February 3, 2019)
I love it! Review by cardenalito17 I love it! (Posted on February 1, 2019)
Good course Review by vvail I am only partially through the course. But what I have picked up until now has been excellent. His basic approach which sets a screen in front of you and then explains what is going on helps me to clearly see what he is talking about. (Posted on February 1, 2019)
Thanks Review by ethan0831 Thanks (Posted on January 30, 2019)

Chess Improvement Secrets for the Busy Player (The GingerGM Method)